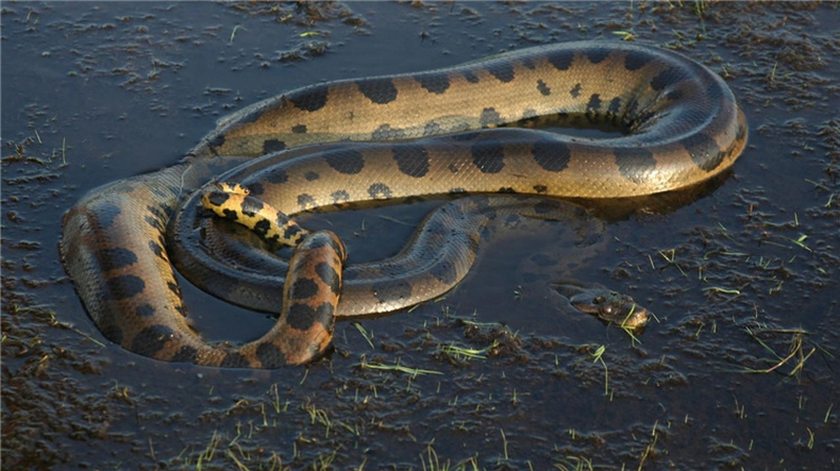 Why do Amazon river animals draw so many attention? The Amazon River is at the heart of one of the world’s largest, most complex, and most diverse ecosystems. This ecosystem consists of a vast rain forest that is home to some of the world’s most unusual and exotic animals. So both the river itself and the rainforest along its banks are filled with amazing and terrifying creatures. Some of these animals, like the poison dart frog, seem too incredible to be real, while others, like the anaconda, the piranha, and the jaguar, have captured the imagination of the world. A few of these creatures are so frightening you’ll be glad that they don’t live anywhere near you.

The green anaconda, or Eunecetes murinus, is the largest and heaviest snake in the world, although it is not the longest. This snake is so big that even The Guinness Book of Records fail to determine its maximum size, although scientists think it can grow up to 22 feet in length. Anacondas are frightening predators because they will overpower and eat virtually anything including fish, birds, deer, crocodiles and even other anacondas. The good news is that there is no actual evidence that an anaconda has ever eaten a human being although there are many unconfirmed stories of man-eating anacondas.

One of the largest freshwater fish in the world—the arapaima, pirarucu, or paiche—can grow up to 15 feet in length. The torpedo-shaped fish is a highly efficient predator that can quickly devour other species of fish. Arapaima is a frightening predator because they can literally jump out of the water and attack prey. Strangely enough, the arapaima needs surface air to breathe. It has gills, but it has to augment its air supply with a lung-like organ called a swim bladder. Ironically, the arapaima is a popular food in Brazil, so it has been fished nearly to extinction in some areas. The Brazilian government has banned commercial fishing for it.

The third Amazon river animal is the electric Eel. It is hard to believe, but an electric eel can produce a jolt of electricity of up to 600 volts. That’s similar to the effects of a stun gun or a TASER. It won’t kill a healthy person, but it will knock a person down or cause a heart attack in some people. Fortunately, they don’t eat humans, but some people are believed to have drowned in the Amazon or its tributaries after an encounter with an electric eel. Electric eels use special cells called electrolytes to stun or kill their prey before consuming it. Ironically enough, an electric eel isn’t an eel at all: it is actually a species of cat fish!

It is hard to believe, but one of the most feared creatures in the Amazon is the candiru, a small catfish. The candiru is feared because of legends that it has burrowed into the genitals and rectums of people swimming or bathing in the river. There is at least one case of a man who required surgery because a candiru actually tried to burrow through his testicles. Candiru are frightening because they attach themselves to a larger fish with their spines and suck their host’s blood for food. That makes this scary little fish a real life vampire.

One of the most extraordinary animals found in the Amazon is the tucuxi, a species of dolphin or porpoise that lives in the river. Even though it looks like a fish, a tucuxi is actually a mammal similar to the bottlenose dolphins often found at aquariums. Unlike ocean-going dolphins, tucuxis are not friendly to humans and don’t adapt well to captivity. They are no threat to humans, although they can eat a wide variety of fish and other animals. The tucuxi lives far inland and can even be found in Bolivia and Colombia. It isn’t known how far the species has spread, but it shares the rivers with another kind of dolphin called the boto.

Here comes one of the most surprising Amazon river animals. The best known and most feared Amazon predator is the piranha, a small fish known for its powerful jaws, sharp teeth, and voracious appetite for meat. Piranhas have a fearsome reputation because of American president and explorer Theodore Roosevelt. In 1913 Roosevelt watched as Brazilian fishermen blocked off part of the Amazon River and trapped a school of piranha in it. Several days later a cow was thrown into the water, and Roosevelt watched as the fish quickly turned it into a skeleton. Roosevelt described the incident in a popular book, which has inspired many movie scenes in which piranha rip people to shreds in seconds. Piranha attacks are common, but fatalities are rare because the fish are small. Interestingly enough, fried piranha is a popular food in Brazil.

This large, carnivorous reptile looks like a crocodile, but it isn’t. Instead, it is a similar species that is somewhat bigger and darker, hence the name. Black Caiman are feared because of their size: they can grow up to 16 feet in length, although legends of 20-foot-long caimans exist. The biggest predator in the Amazon, the Black Caiman is considered a dangerous species because it can attack humans. Humans are a bigger threat to the caiman than it is to them because people nearly hunted it to extinction to get its hide for leather. Today it is a protected species, and the Black Caiman is making a comeback.

It is not known if this unusual species, which is also called the bufeo or boto, is extinct or not. Like the tucuxi, the bufeo is a mammal rather than a fish, but it doesn’t behave like other porpoises such as the bottle-nosed dolphin. Instead, it is a loner that does not live or hunt in pods or packs like other dolphins do. The bufeo is unusual because of its long snout, pink-colored skin, and bump-shaped head. Interestingly enough, the bufeo is one of the few animals that can turn its head completely around. The pink dolphin is so rarely seen that it has been reported extinct at various times.

This highly efficient predator is the largest member of the otter or weasel family. It can grow to nearly six feet in length—the size of a pony. There are historical accounts of male giant river otters that grew to be over seven feet in length. Giant river otters are very noisy animals that make a wide variety of noises. They are also social animals that live together in groups. Giant river otters can be very vicious creatures. Researchers have seen encounters in which they literally rip each other to pieces. Sadly enough, giant otters are a threatened species because they were nearly hunted to extinction for their pelts. Interestingly, one of the giant river otter’s favorite foods is piranha.

This is the last on our Amazon river animals list. A manatee is a mammal related to elephants and seals that has flippers but no legs. The almost hairless creatures have whiskers around their mouth. Even though it looks like a seal, a manatee lives almost entirely in the water. The Amazonian manatee is the only species of manatee that lives only in freshwater. It is also the only manatee that can be found deep inland. A manatee is an herbivore, meaning that it eats only plants. In addition to water plants, manatees will eat grass and other plants in flooded areas. Interestingly, a manatee can live up to seven months without food because of its slow metabolism. The Amazonian manatee is considered a vulnerable species because hunting and pollution threaten its environment.

Most Hazardous Countries For Volcanoes