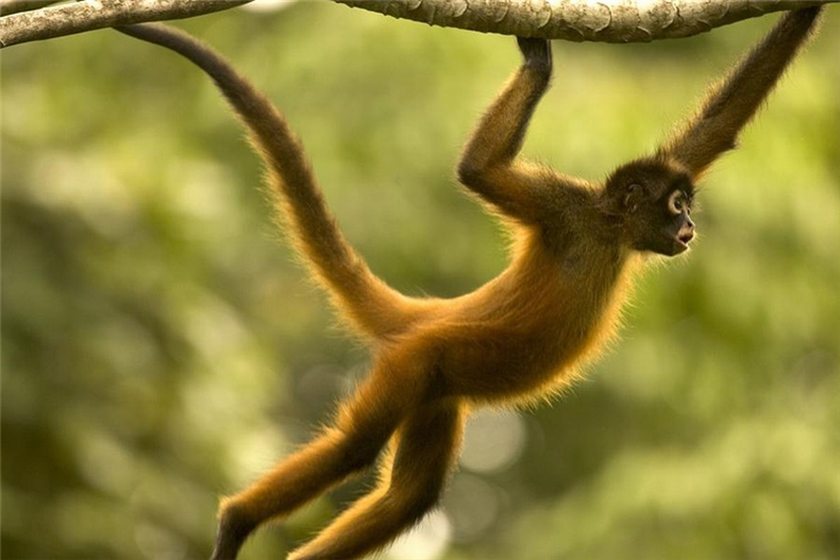 The Amazon rainforest is home to more than half the world’s species of animals, according to scientists. Amazon animals are among the most interesting and exotic on Earth.

The variety of the animals of the Amazon is absolutely astounding. The region located between the Atlantic Ocean and the Andes Mountains contains some of the world’s most beautiful creatures, some of the world’s gentlest beasts, and a few of the most dangerous animals in the world.

These highly intelligent creatures are considered the most intelligent of the new world monkeys. They are often unseen by people because they live in the upper layers of the forest. The name spider comes from their agile limbs and long flexible tail, which serves as a sort of fifth limb. There are several varieties of spider monkey living throughout the jungles of the new world. Interestingly enough, spider monkeys live in well-organized groups that even have leaders. Almost all the spider monkeys are considered endangered or threatened species because logging is destroying their habitat.

Also known as the ant bear, this wooly creature with a long snout is insectivorous. Giant anteaters are easy to identify because of their thick bushy tails, long snout, and distinctive coloring. The black marks on the beast’s shoulders are among the most unusual in the animal kingdom. A giant anteater’s ability to smell is 40 times than of human beings. The beast also has a long tongue that can extend out to 18 inches and move at speeds of up to three flicks a second. Oddly enough, anteaters cannot produce stomach acid. Instead, the acid in the insects’ bodies is used to digest them.

The capybara is the world’s largest rodent: it can grow up to 4.4 feet (134 centimeters) in length and weigh up to 66 kilograms (150 pounds). Capybaras live in groups of up to 100 that roam through both forests and the plains. Capybaras are semi-aquatic animals. They are also kept as pets and raised for meat in some parts of the world. Even though they are rodents, capybara eats a vegetarian diet that includes grass. Interestingly, some people believe that wild capybaras are now found in the state of Florida, which makes the capybara an invasive species in the United States. The capybaras in Florida are probably pets that escaped or were abandoned by their owners.

This colorful bird is one of the best known of the animals of the Amazon. Even people who have never been to the rain forest can recognize it easily because of its large and colorful bill. Astoundingly, a toucan’s bill is actually half the length of its body. Despite its appearance, the bill is actually lightweight because it is made out of a spongy tissue called keratin. Even though toucans are related to woodpeckers, they don’t carve holes in trees. Instead, they live in empty woodpecker nests. A toucan is an omnivore: its main diet is fruit, but they sometimes hunt insects and lizards.

Properly known as the common basilisk, this lizard is called the Jesus or Jesus Christ lizard because it has the ability to run on the surface of the water. This led Catholic explorers to compare the lizard to Jesus, who walked on water in the Gospels. A basilisk can “run on water” because it moves at speeds of up to 8.4 kilometers an hour or 5.2 miles per hour. Observers note that the lizard can run up to 20 meters on water. Oddly, basilisks run on their hind feet, much like human beings do. The name basilisk comes from a mythical Greek creature called a basiliskos that was part rooster, snake, and lion.

This is strange-looking turtle known for its odd-shaped head and long neck. An interesting feature of this Amazon animal is the horn on its head. The mata mata is a purely aquatic species, meaning that it never leaves the water even though it breathes air and has the ability to walk. The mata mata’s most interesting trait is how it feeds: it literally vacuums prey, usually fish, into its stomach through its mouth, which acts like a vacuum cleaner. Strangely enough, the mata mata is not able to chew because of the shape of its mouth. Instead of chewing, it digests whole fish in stomach.

Also known as a honey bear, bear-monkey, or lion monkey, this creature is rarely seen by human beings: it is a nocturnal and rarely leaves the tops of trees. Instead, it usually sleeps during the day. Even though kinkajous look like monkeys and have a long tail, they are actually a unique species. A kinkajou is considered a carnivore even though 90% of its diet consists of fruit. Kinkajous are called honey bears because they love to drink nectar from flowers. Even though they are sometimes kept as pets, kinkajous can be deadly to their owners because they carry a potentially deadly parasite called the roundworm.

This incredible Amazon animal lives up to its name: you can actually see through its skin. If you look closely, you can see the heart, liver, and other organs. There are actually several species called glass frog, and not all them have translucent or see-through skin. Such frogs are known for their bright color, which is usually lime green. Interestingly enough, glass frogs usually lay their eggs in the leaves of trees overhanging the river. When the eggs hatch, the tadpoles fall from the tree into the water. Unusually, some glass frogs are believed to care for their young.

This extraordinary creature is one of the most unusual animals in the world. A sloth has a very low metabolism (about half of that of a normal mammal, such as a human) and a very low body temperature, as low as 86 degrees Fahrenheit or 30 degrees Celsius. Sloths have a well-earned reputation for slow movement. It takes their bodies up to a month to digest their food. Interestingly enough, two thirds of a sloth’s body consists of the contents of its stomach because of the low-energy food it eats, mostly leaves. A sloth also has a tongue that is 10 to 12 inches long. Sloths move only when necessary and sleep for 10 hours a day. Today’s sloths are about the size of a monkey, but some extinct prehistoric sloths were considered as the size of elephants.

How to Remove Rust

How Long Can You Live Without Water?

How Big Data Can Propel the Future of Cyber-Security

Deadliest Insects in the World