Ebola hemorrhagic fever, often referred to as simple as the Ebola Virus Disease, actually can be caused by one of five different strands of the virus. Out of these five strains, only four can cause the virus in humans, while the fifth is strictly causing the virus in some types of animals. Ebola is very deadly because it causes both internal and external bleeding in victims while attacking the whole human immune system. This article will explain ebola death rate both in the current 2014 outbreak and in history outbreaks. 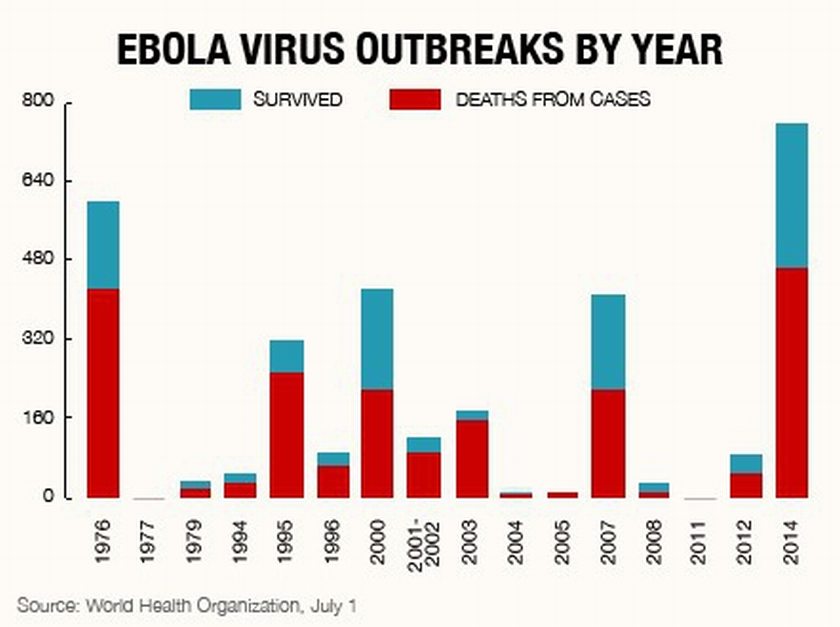 How Many People Have Died from Ebola Outbreak 2014?

The current Ebola outbreak started in Africa in December of 2013, in the area of Guinea near the Liberian and Sierra Leone border. The strain of ebola virus is Zaire Ebolavirus or simply Ebola virus. Those who traveled, took this across the border, thus expanding the geography of this outbreak. In just a few short months in March of 2014, Liberia had 8 infected people, while Sierra Leone had 6. At the end of June, a total of 467 people had died from Ebola, while 759 had become infected. This is making this the largest outbreak of Ebola that has been seen. Worldwide, there have 9,936 cases of Ebola and 4,877 deaths associated with Ebola as of October 22nd. Most of these cases and deaths are taking place in Liberia, Sierra Leone and Guinea, the three countries in which the outbreak originated.

According to WHO and CDC updates, based on information reported by the Ministries of Health: As of January 10, 2015, the total laboratory-confirmed cases are 13430 and the total deaths are 8386.

The death rate, or the case fatality rate or risk, is a way that states just how much of a chance there is in death compared to the survivors of the virus or disease. However, it is important to note that the best number for this is found after the epidemic has passed. It is hard to determine the CFR rate when the epidemic is still ongoing. The reason for this is that there are several pieces of information that is not taken into consideration when these rates are made. Such as the number of cases that are battling with the virus currently. Secondly, there are times in which a virus or disease case is not taken into consideration if it is believed to be a mild form of the virus, or if the patient is not placed in a hospital and instead deals with the virus at their own home.

The WHO estimated the death rate is at 70%. Previously, the death rate was thought to be at 50%, thus this virus epidemic has been upgraded to a high mortality disease after more statistics are being gathered. Currently, the world is working to get the proper medical care to the regions of the world that need this medical care to ensure that the death rate is lowered and this virus does not take the lives of even more people. However, it takes a while for this to be arranged, and the Ebola virus is rapidly spreading.

Based on the above mentioned statistics, the death rate of ebola outbreak 2014 is at 64.4%.

How to Come Up With a Blog Name