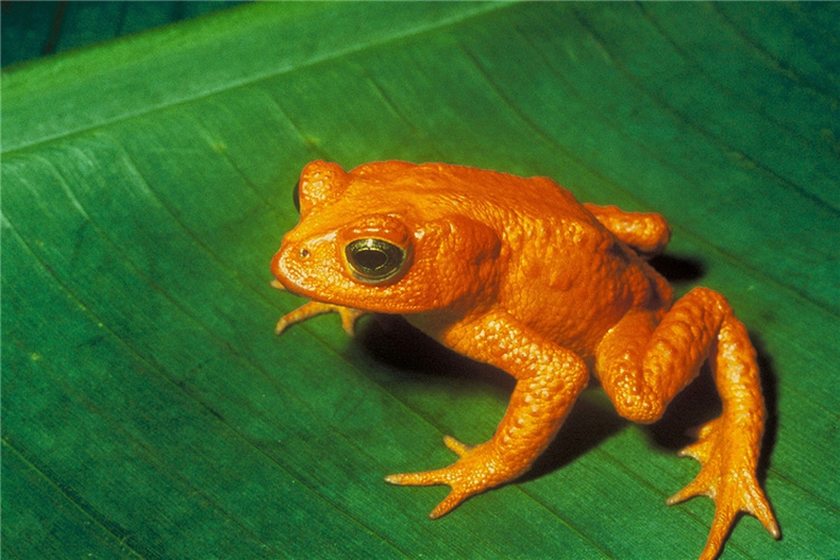 Human beings might be the greatest cause of extinction in the history of the planet. Ever since our ancestors started hunting and spreading across the globe, hundreds if not thousands of species have perished at human hands.

The sorry truth is that we don’t know how many species vanished at human hands in the past. Today it is a different story because science can show us what animals are vanishing and how fast. That means we have the ability to prevent further extinctions if we want to. Unfortunately, our present efforts to save animals have come too late for more than a few species.

The golden toad was only known to science for just 23 years. The first one of these colorful amphibians was spotted in Costa Rica in 1966. The species is believed to have died out in 1989. The toad only lived in a small area of Costa Rica’s Monteverde Cloud Forest, which is just 1.5 miles square. The last golden toad was seen in 1989, so it is possible that some might still be alive. Scientists believe deforestation and a fungus might have killed off this species.

This species of tiger only lived on the Indonesian island of Bali. The last one probably died in the mid-1960s, around 50 years ago. The last confirmed sighting of the Bali tiger was in 1937, but scientists think that one could have been alive as late as the mid-1960s. The cause of extinction was the introduction of firearms to Indonesia in the 1600s. Guns gave the people of Bali, who regarded the cats as evil spirits, the means to exterminate them.

The Eskimo curlew, which was also known as the Dough Bird or Prairie Pigeon, was a small bird that traveled between Alaska and Argentina in a single giant flock. That made them an easy target for hunters in Canada, the United States, and South and Central America. Since the curlew traveled in one giant flock, one hunter could knock dozens of them out of the sky with a single shotgun blast. The situation was worse in Canada, where hunters killed large numbers of curlew in their nesting rounds. The last Eskimo curlew is believed to have died in the early 1970s—about 40 years ago—but there have unconfirmed sightings of them ever since.

The Great Lakes once teamed with this salmon-type fish but no more. Until the 1900s the blackfin cisco was so common it was commercially viable to catch it. No sightings of the blackfin cisco have been reported since 2006. Scientists believe that over fishing and invasion of habitat by aggressive invasive species killed off this fish. It isn’t known exactly when the blackfin cisco died off: the last confirmed sighting was in 1969, but one was reported in 2006. The cisco probably died off because it couldn’t defend its environment from aggressive invaders or invasive species.

Despite its name, this deer was actually native to Thailand in Southeast Asia. It was named after the man who first described it, Sir Robert H. Schomburgk, the British Counsel in Thailand in the 1850s and 1860s. The species began declining shortly after its discovery because most of its habitat was converted into commercial rice paddies. Later it was easily hunted out because the deer had to retreat to high ground during monsoon rains, which made it easy to hunt. The last known Schomburgk’s deer died in captivity in 1938, but the species hasn’t been seen in the wild since 1932. In 1991 a set of antlers from a Schomburgk’s deer was found in a shop in Laos, which gave hope that some might still exist in the remote forests of Southeast Asia.

Large herds of this horse, which was also known as the hemippe, wandered the deserts of Syria, Israel, Jordan, Saudi Arabia, and Iraq as late as the 16th Century. Its numbers started dropping as better guns appeared. The last known Syrian wild ass died at a zoo in Vienna in 1927. In the same year, the last known wild animal was shot in Jordan. The Syrian wild ass was the smallest known specimen of horse, it is also one of the few extinct species mentioned in the Bible, including the Old Testament books of Job, Psalms, Jeremiah, and Genesis.

This large butterfly is so rare that nobody actually knows whether it is extinct or not. The possibility is that it is extinct because nobody has seen one since 1977. The Large White lived on the Portuguese island of Madeira. The most likely reason for the extinction was that it caught a deadly virus from another species of butterfly introduced to the island in the 1950s. The Large White was one of the largest butterflies known it was nearly two inches in length. It was also one of the most prized butterflies for collectors.

Interestingly enough, this species was declared to be extinct twice, once in the 1840s and again in 1994. The foot-long marsupial looked like sort of a rat, but it hopped like a kangaroo. Most scientists believed the desert rat-kangaroo died out in the 1840s, but it was rediscovered in 1931. Sadly enough, it hasn’t been seen since 1935, leading most scientists to believe it died out. A few dead desert rat-kangaroos were found in the 1980s. The rat-kangaroo was probably killed off by fox hunting. Scientists believe that they were hunted to death by red foxes introduced to Australia for fox hunting by British settlers.

This snake was only found on a few islands in the remote Indian Ocean nation of Mauritius. It was called the Round Island Burrowing Boa because it was last seen on Round Island in 1975. This snake died out because goats and rabbits dumped on the islands by sailors destroyed its habitat. This snake had the smallest habitat of any known animal—only around 1.5 square kilometers—yet it grew up to three feet long. Little is known about this snake because it was so rare scientists don’t even know what it ate.

Being tasty and easy to catch is a surefire recipe for extinction for a species. Case in point: the Lesser Stick-Nest Rat. This gentle rodent didn’t stand a chance when the British decided to settle Australia. It had no defense against the animals the British brought, and the early convict settlers thought it was delicious, so they made it part of their diet. The rat also made itself easy to catch by building mounds of sticks up to three feet tall so they were easy to find. It made itself easier to catch by going into houses to get sugar. Interestingly enough, the last known sighting of a wild lesser stick-nest rat was filmed by a newsreel camera in 1933. Some scientists hold out hope that a few might exist somewhere out in the outback.

How Are Pearls Formed?

How to Breed Goldfish: Basic Information You Need to Know

Top 8 Dinosaurs That Are Scariest in History