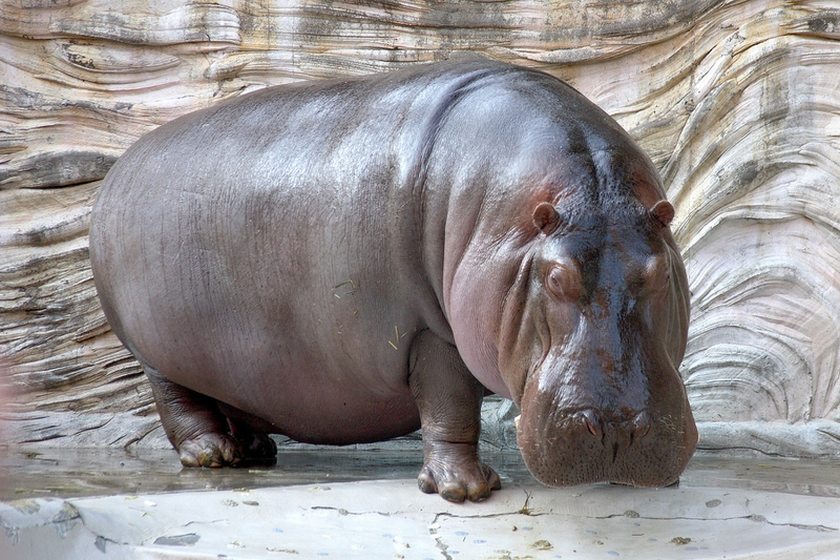 The challenge in compiling a list of the world's most aggressive animals is that, to a certain extent, all animals are capable of showing aggression at some point in their lives. It could be a mother bear protecting cubs, a lion hunting prey, walruses competing for a harem or even just a domesticated rabbit defending itself. The point is, every member of the animal kingdom demonstrates aggression to some extent, so how do you determine which are the most aggressive?

The following list is a compilation of the most aggressive animals, based on a range of factors including notoriety, ferocity and level of danger posed to humans. It is by no means an exhaustive list, nor is it in any particular order. However, it cannot be denied that the following are among the world's most vicious animals.

The common hippopotamus has a placid appearance that belies a fearsome reputation as one of the world's most aggressive animals. This hefty herbivore is found throughout sub-Saharan Africa, most commonly in lakes, rivers and swamps, although they will emerge from the water to graze and are surprisingly agile on land. The danger associated with hippos comes when encountering a territorial bull which is patrolling his stretch of river. Aggressive bull hippos have been known to overturn water crafts and impale people on their wicked incisor teeth.

With the capability to bring down an adult water buffalo, it's obvious that saltwater crocodiles are not to be trifled with. An saltwater crocodile is around 3 times the average length of  human and they are known for being highly protective of their nests during breeding season, as well as territorial. Found throughout Africa, northern Australia, India and even Southeast Asia, this crocodile is legendary for its lightning fast attacks, followed by an underwater "death roll" intended to dismember their unwitting victim.

"Crotalus atrox" isn't really a name that strikes fear into your heart, is it? But "western diamondback rattlesnake", now that is a different story. The western diamondback (AKA Crotalus atrox) is renowned for striking both fear into the heart and venom into the body. Growing to only 6 feet long during their impressive 20 year lifespan, Crotalus atrox is found throughout the US and Mexico (where it causes deaths every year) and is solely responsible for almost all the recorded snakebites in New Mexico. Unlike many other species of snake that will shyly slither away, the aggressive Crotalus atrox is famous for never backing down from a confrontation.

The rhinoceros is one of the largest remaining types of "megafauna", with all 5 species of rhino growing to over 1 metric ton in weight. Although herbivores, rhinos are a formidable force to be reckoned with, possessing mighty thick skin (up to 1.5 cm thick), a large horn and a notoriously bad temper. Safari drivers that fail to keep a respectful distance have found their trucks being rammed by these aggressive animals. Found throughout Africa and Southeast Asia, the rhino has long been illegally hunted for its impressive horn, so that 3 of the 5 species of rhino are now listed as critically endangered.

Perhaps not the first creature to come to mind when considering a list of the most aggressive animals, the Tasmanian devil is nonetheless worthy. Found only on the tiny island state of Tasmania in Southern Australia, the "Tassie devil" is only about the statue of a medium sized dog but is known for its offensive smell, the disturbing screeching noise it makes and its extreme ferocity when feeding. Anyone foolish enough to come between a feeding devil and his carrion would find themselves on the receiving end of a ferocious attack.

A mother grizzly bear defending cubs is considered by many to be a strong contender for the title of the world's most aggressive animal. Found across North America, Asia and Europe, any grizzly bear encountered is worthy of respect, but a mother bear with cubs poses a far greater threat, being responsible for over 70% of fatal attacks on humans. The grizzly bears immense jaws and crushing bite force make it especially dangerous – scientists estimate that a grizzly bear bite would be capable of crushing a bowling ball.

Perhaps the movie "Jaws" is at least partly responsible for the perception that great white sharks are one of the most aggressive animals on the planet, but there is no doubting that they are capable of extreme aggression towards humans. Found in the coastal surface waters of all the worlds' major oceans, the great white shark is considered the ocean's apex predator. With mature individuals reaching over 6.5 meters in length and capable of speeds of up to 56 kilometers per hour, it's no wonder that humans come off second best when confronted by an aggressive great white shark. Although humans are not considered a natural source of prey, marine biologists speculate that great whites will, at times, mistake a human for a seal and this is what leads to devastating attacks. Whatever the reason, it is undisputed that great white sharks are responsible for more fatal attacks on humans than any other species of shark.

So aggressive they've been nicknamed "killer bees", the African honey bee was created as a result of a failed experiment to breed a better honey producing bee. Accidentally released in the mid-1950's, these "killer bees" have spread from Brazil into Argentina, north into Central America and eventually into the Southern United States. These aggressive bees have been known to chase a threat to their hive for a distance of almost a kilometer, and will send the entire colony out in hot pursuit. Even minor vibrations are enough to set off an attacking swarm, such as a person walking up to 50 meters away, or a power tool being used 100 meters away. A fleeing human can't even find refuge from an African honey bee by jumping into a body of water, as these aggressive little creatures will wait for their hapless victim to surface so they can continue their rampage.

How to Sanitize Beer Bottles?