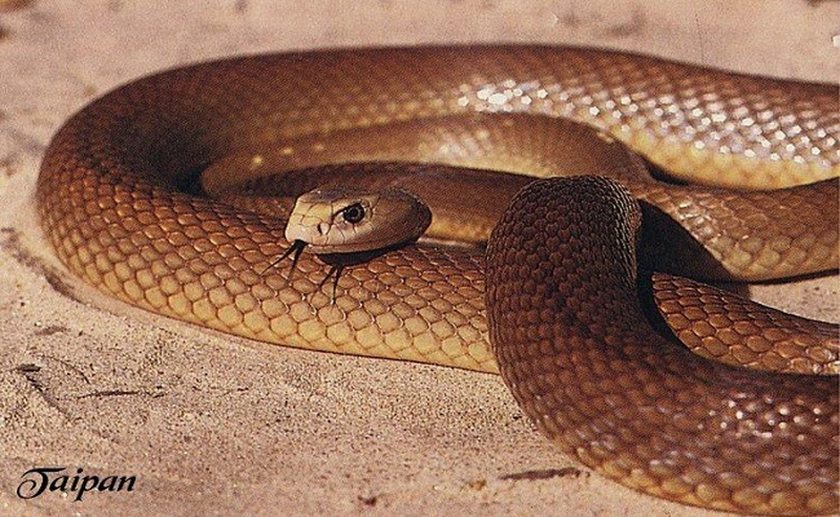 Although it is extremely unlikely that you will ever see a venomous snake, people tend to be much more afraid of them than they are of most other animals. The chances of having one bite or killing you with its deadly toxin are even less likely. The chances are much greater that a person will die from illness such as heart disease or cancer, or from a car accident than from a snake bite. But still, the fear of poisonous snakes exists for many. Most venomous snakes live in areas where it’s tropical, but there is always that possibility that poisonous snakes live in a zoo or research center in your area. Here is a list of the 10 most venomous snakes based on the level of their LD50 (abbreviation for "lethal dose, 50%", equals to "median lethal dose" in toxicology, meaning that half of the test subject will die of this dose).

First located in the semi-arid areas of Australia in the late 1800's, the Inland Taipan is considered to be the most venomous snake in the world, with a LD50 of 0.025 mg/kg. The venom level in a single bite is lethal enough to kill at least 100 men in as little as 30-45 minutes.

The Inland Taipan is normally shy, but will strike with precision if threatened. This poisonous snake ranges from dark tan to brownish green in color, depending on the season. Its back, tail and sides may be grey or brown and have dark, diagonal scales. It ranges from 1.8 to 2.5 meters in length, and has 3.5-6.2 millimeter long fangs.

The Dubois' sea snake resides in the waters of the Coral Sea, Timor Sea, Arafura Sea, and the Indian Ocean, staying in parts not deeper than 80 meters deep. This most poisonous of all sea snakes has an LD50 of 0.044 mg/kg, and will normally bite only if provoked.

The Dubois' sea snake grows to 0.8-1.48 meters in length and has relatively short fangs at just 1.8 millimeters. The upper part of its head has nostrils which contain nasals. Its head is marginally wider than its body and its eyes are separated by scales. Its body has a number of smooth, dorsal scales which ends with a long tail. The snake's coloring varies from snake to snake.

The eastern brown snake can be found in Indonesia, Papua New Guinea, and Australia. It is the second most venomous land snake, and the third most venomous snake overall, with an LD50 of 0.053 mg/kg. The snake usually flees if it’s confronted, but will bite if attacked, usually delivering a non-lethal dose of venom at first.

Distribution: Tropical oceans around the globe

The yellow bellied sea snake lives in tropical oceans around the globe. It has very potent venom with a LD50 of 0.067 mg/kg.

This snake's neck is about twice the diameter of its body, which features up to 47 rows of scales that are closing together and four-sided. It also has as many as 406 tiny ventral scales which can barely be seen. Its narrow head has a long snout, large nostrils, and nasals. The snake is usually black on top and brown or yellow on the bottom. Males tend to grow up to 0.72 meters in length, and females, slightly larger, to 0.88 meters.

The Peron's Sea Snake lives in the western tropical waters of the Pacific Ocean and is the only sea snake that has spines on its head. Its venom is very toxic with an LD50 of 0.079 mg/kg.

The thickest part of the snake's body is about 3 times the diameter of its neck. It has a small head with supra-ocular scales that are raised and pointed. It also has a flat tail.

This snake is medium in size, growing to about a meter in length. It is gray, olive or tan in color and has thin cross bands that meet at the belly.

The Coastal Taipan is a large snake that resides near the eastern and northern Australian coasts and in New Guinea. This snake is the third most venomous land snake worldwide with an LD50 of 0.099 mg/kg.

As the largest snake found in Australia, it typically grows up to 2 meters in length, with the largest one on record measuring 2.9 meters long.

This snake features a big, long head with a light colored, angular brow. It has a slender but strong body, which is usually olive or reddish brown, but is sometimes dark grey or black on the back with a light yellow belly.

The many-banded krait can be found throughout Southeast Asia and southern and central China. Its venom is very poisonous with a LD50 of 0.108 mg/kg.

This medium to large sized snake is usually 1-1.5 meters in length, but can grow up to 1.85 meters long. The body of this snake is slender, has smooth, glossy scales and is ridged along its vertebrae. It is dark bluish black or black in color and has between 21 and 30 cross bands on its body. It has a short, pointy tail and a flat, oval shaped head with large nostrils and small fangs.

The black-banded sea krait is a sea snake which can be found in the western Pacific Ocean waters in coral reef areas. Its venom is toxic with an LD50 of 0.111 mg/kg.

This snake moves slowly and tends to hunt for nearby prey rather than chasing it. It does not bite humans unless provoked. It needs oxygen to breathe so it has to go to the surface approximately every 6 hours.

It has a thick body, a short head, and a tail that resembles a fin. The snake can grow as long as 1.7 meters.

The black tiger snake can be found in Australia's southern region, its islands, and in Tasmania. It is a venomous snake with a LD50 of 0.118 mg/kg. When provoked, this snake flattens its body and raises its head as it prepares to attack. It tends to be most active during warm nights.

The snake can be found in a variety of colors, ranging from olive, yellow orange, or black with an orange or yellow belly. It also features bands like those on a tiger. It can vary greatly in size and can grow to up to 2.9 meters in length.

Distribution: Tropical waters of the Indo-Pacific

The beaked sea snake is the most common type of sea snake that lives in the tropical waters of the Indo-Pacific. More than half of all sea snake bites and up to 90% of deaths are from this poisonous snake, whose venom has an LD50 of 0.1125 mg/kg. This snake is aggressive in nature and will bite even when not provoked.

This snake normally has a dark grey back with white sides and belly, and has 50-70 rows of scales on its back, and up to 314 on its belly. It normally grows to about 1.1-1.2 meters in length.

How to Clean Canvas Shoes

Earth-Like Planets: Do They Exist?