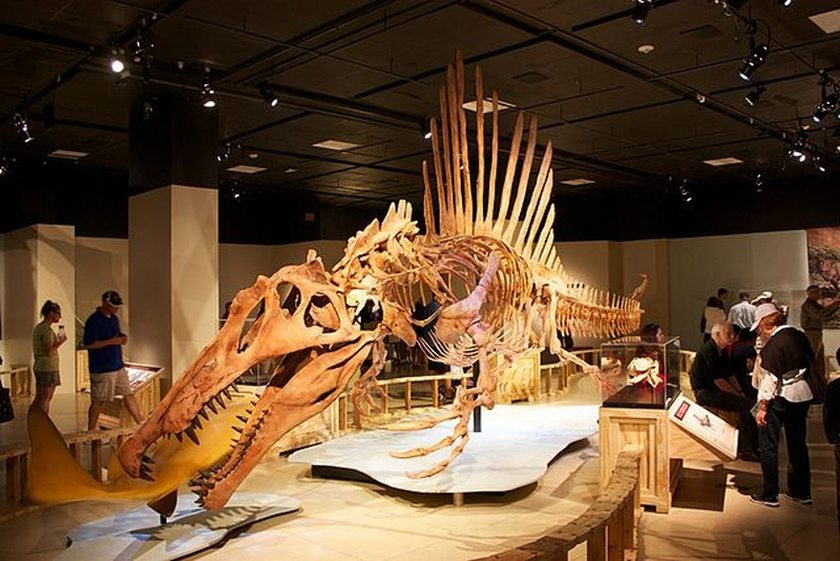 Human beings like to view themselves as the pinnacle of all species, yet, in geological terms, we humans are mere infants. When you stop to consider that the last dinosaurs became extinct over 65 million years ago, you really start to get an accurate impression of just how "new" the human species is. However, once humans began to understand just how terrifying some of Earths' former occupants were, many started to agree that it's just as well the mega fauna of prehistory are no longer roaming amongst us! Nevertheless, it's always fun to reminisce about what might have been, so here is a list of the top 8 scariest prehistoric animals.

At an estimated 12.6 to 18 meters in length and weighing between 7 and 20 metric tons, the Spinosaurus was possibly the largest of all the carnivorous dinosaurs. Their 6 foot long skull gave them a distinctly crocodilian appearance, but, perhaps more menacing, also made it capable of swallowing a human whole. Hailing from Egypt and the surrounding Middle East, the Spinosaurus had a large sail protruding from its back, possibly used as a means of regulating body temperature or for attracting a mate. As a creature that ate other dinosaurs, the Spinosaurus has a well-deserved place at the top of the list.

So terrifying in appearance that its name actually means "Tyrant Lizard King", the Tyranosaurus Rex is one of the most well-known, as well as one of the scariest dinosaurs. Ranging across much of what is now western North America, the "T-Rex" was capable of growing up to 12.3 meters in length, with a massive head and a long, heavy tail. As the largest carnivore in its environment, Tyrannosaurus Rex was an apex predator, capable of feasting on just about whatever it wanted.

Picture a Great White Shark. Now picture that shark being 6 times the size of a Tyranosaurus Rex, with teeth that were 15 centimeters long. This terrifying beast was the Megalodon, a shark so big that it fed on full sized whales. Scientists agree that this "Mega-Shark" had possibly the strongest bite of any animal that ever lived, with an estimated bite force of between 10.8 and 18.2 tons! Compare that to the bite force of a lion, at only 600 pounds!

Certainly one of the scariest prehistoric animals, the Titanoboa was the reptile haters' nightmare. Slithering the earth around 58 to 60 million years ago, the Titanoboa was like a supersized version of the modern Boa Constrictor. At a length of around 12.8 meters and an estimated weight of over a ton, this snake was without a doubt the longest and heaviest snake that ever lived, inhabiting tropical swamps similar to those favored by the modern Anaconda.

A contender for the crown with Tyranosaurus Rex, the Rajasaurus (meaning "King of Lizards") lived on the great landmasses belonging to the supercontinent of Gondwana (e.g. South America, Africa, India, etc.). Part of the carnivorous theropod family (which included the "T-Rex"), the Rajasaurus was distinguished by its single nasal-frontal horn. Standing over 2.5 meters tall and over 7 meters long, the Rajasaurus deserves its place amongst the scariest dinosaurs.

Found in what is now Kansas, Alabama, Nebraska, Wyoming, and South Dakota in North America, the Pteranodon was one of the might flying pterosaurs, with wingspans of over 6 meters in length. This winged beast was the largest of the known flying reptiles and, particularly for those with a phobia of bats, was certainly one of the scariest dinosaurs.

Perhaps not surprisingly, the Argentinosaurus was discovered in Argentina and is estimated to have roamed the South American continent during the Late Cretaceous Epoch, between 97 and 94 million years ago. Whilst only limited parts of the Argentinosaurus have been recovered, paleontologists have determined that it was one of the largest known dinosaurs, weighing over 100 metric tons and possibly measuring over 35 meters long.

The ancient relative of the modern day salt-water crocodile, the Sarcosuchus had a ferocious snout that accounted for 75% of its total skull length. This mighty sauropod measured up to 12 meters long, almost twice the length of a modern salt-water crocodile, with a weight of up to 8 metric tons. Found throughout what is now Africa and South America, this haunting reptile is a terrifying reminder of the prehistoric beasts.

How to Make a Smoke Bomb

Which Wolf Is the Largest in the World?